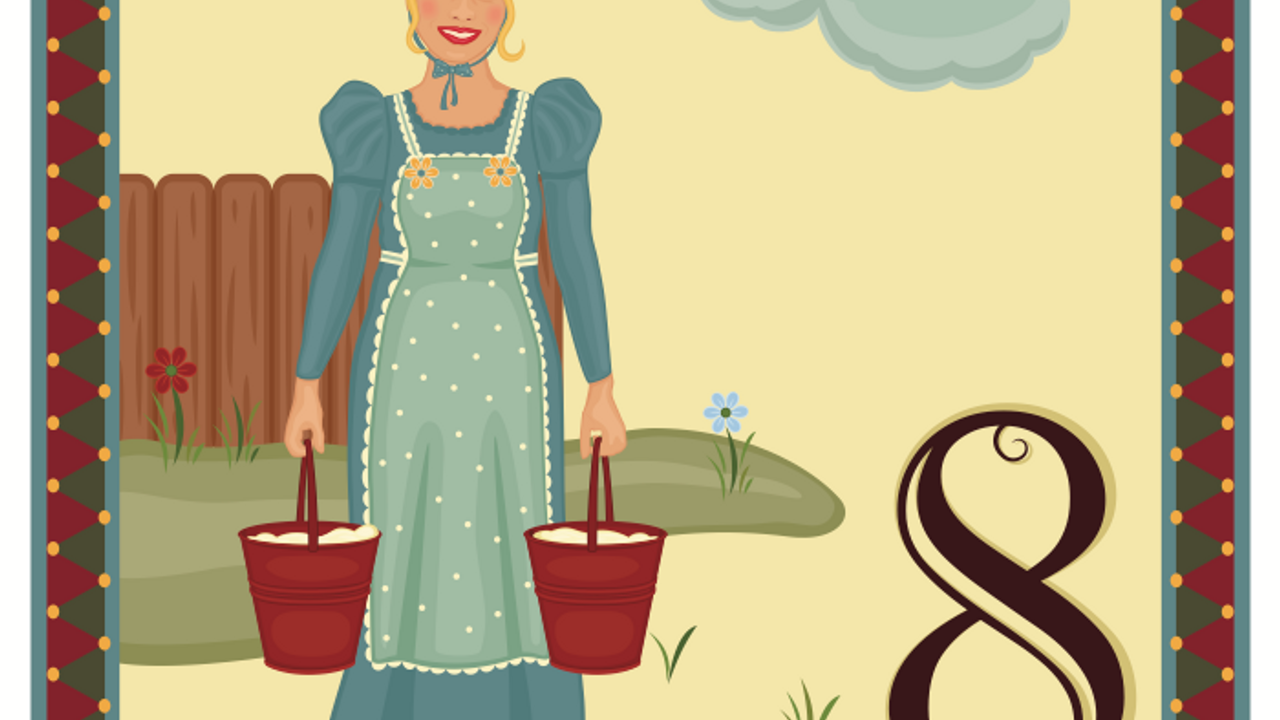 How to Milk a Cow

As Sententia celebrates the 12 Days of Christmas, I anticipated eight maids a milking …

because I worked on a dairy farm for several months in high school.

I was sent to a boarding school that believed young people shouldn’t just sit in the classroom all day but should work a half a day in manual labor to develop life skills as well. I’m pretty sure we were really just cheap labor.

But I enjoyed working in the dairy, mostly because it was one of the few times we didn’t have adults hovering over us (the farmer was too lazy to join us at 4:00 AM), and, after breakfast, me and one other boy had the dormitory to ourselves until noon.

One could say that most of the skills I learned during that work/study program were wasted. I haven’t touched a cow since, much less cleaned her teats before placing suction devices on her to extract milk. Maybe I was more dedicated to my studies to make sure I didn’t need to place “dairy farmer” on my resume, but otherwise, I haven’t found another application of those skills.

Others might say I learned other skills on the farm. There were the organizational skills of managing four uncomfortable cows at a time, some who finished milking sooner than her neighbors, and wanted to get out of there. Other cows were mean and unruly. But cobbling hind legs to keep a cow from kicking off the suction cups doesn’t translate to working with humans.

And the job did involve quick reflexes. When a cow kicked off a suction cup, it didn’t matter what I was doing, I had to leap over and scoop it off the floor to minimize the feces and urine being sucked into the milk tank (I haven’t been able to look at, much less drink, a glass of milk since).

But what I can tell you about the experience is that of all the things I learned during those last two years of high school, what I remember involved me physically interacting with the material. In this case, when a cow was on antibiotics, we had to milk her by hand. This involved specific, complex hand movements with both hands simultaneously in different rhythms on moving creatures. Way more difficult to perform than what I was learning in typing class (perhaps I am a better typist thanks to my milking skills).

I excelled at algebra but can’t do formulas now to save me. I had fun in history class (thanks to the teacher) but have no idea what we studied. I’m a talented writer, so I must have learned something in English class. But I certainly can’t recall anything from science classes.

But I know how to milk cows.

There’s been a recent spurt of research on the advantages of physical activity and learning. When students physically engage with the material, instead of simply reading or listening, they have better recall. Better yet, they are more creative.

I especially like this study. When Even Polman of the University of Wisconsin-Madison asked students to generate ideas for uses of a new building on campus, he had half of them hold out one hand while brainstorming. The other half of students were told to alternate outstretched hands as they brainstormed. Those who were literally enacting “on the one hand… on the other hand…,” came up with nearly 50 percent more uses for the building, and their ideas were more varied and creative.

While you may not be teaching people a physical skill like milking a cow, can you add physical interaction into your learning programs? How can we engage learners and improve their experience by creating movement and physical involvement with the material? In a live class, for instance, maybe we let them get out of their seats and retrieve their own workbook and learning materials. In eLearning, maybe we instruct them to get out of their seats and find something in their physical world, thus moving away from the screen. Maybe we have them physically enact a process or procedure we’re teaching.

Or maybe we should get some cows for them to milk?