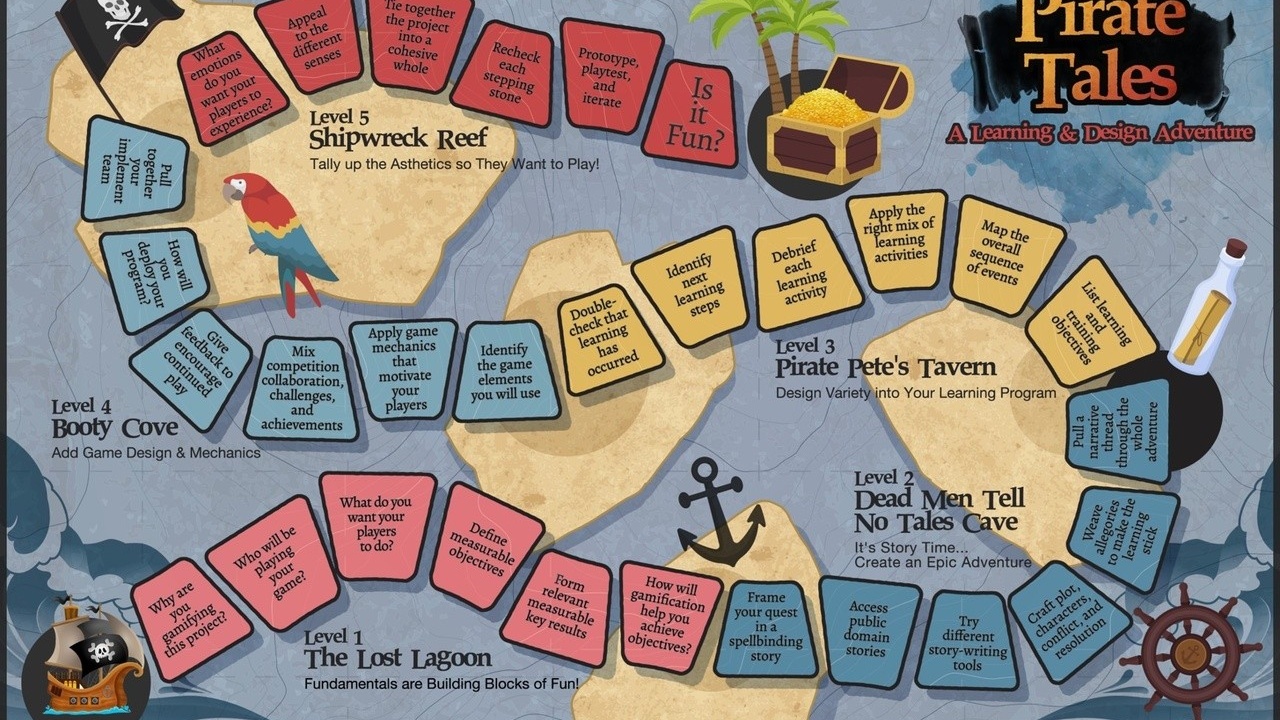 It All Started with Nick...

The Sententia Gamification Certifications are based on a trademarked and proven framework for gamifying adult learning programs.

And because story plays such an integral part in successful and engaging design, we start our adventure with the story of Nick. And it goes like this...

Meet Nick, your guide for this adventure. Nick is the great-grandson of the infamous pirate Captain Nathaniel Wilson. For years, Nick sat at the feet of his grandfather and listened spell-bound to the colorful stories of his notorious ancestor who would fight recklessly and plunder mercilessly. The tales were full of Captain Wilson winning fights, burying gold and treasure, and bragging about his exploits at Pirate Pete’s Tavern. To Nick, Captain Nathaniel Wilson must have been the most fearsome Pirate of the High Seas!

Nick never knew for sure if the stories were fact or mere legend, but they filled his heart and mind with visions of treasure and fame. His grandfather had told him, “Always be yourself, unless you can be a pirate. Then always be a pirate.” Nick yearned for a life at sea full of constant adventure and danger, but as he grew and became an adult, those dreams slowly became childhood fantasies.

Last week, Nick attended an annual conference for talent development professionals and the keynote speaker regaled the audience with tales of a new strategy for learning and design that she called gamification. He listened earnestly as she described how the goal of gamification is to increase learning and engagement through key concepts found in game design and behavioral psychology.

The speaker was even bold enough to proclaim that by adding game thinking and game mechanics to training, gamification not only increases interest, it makes training FUN!

And then the speaker gave them each a treasure map and challenged the audience to embark on this dangerous quest—to sail the islands off Pirate’s Cove and become the most famed and feared pirate the world has ever seen. Or maybe she said most respected and sought after instructional designer. But Nick was spellbound once again as she warned him that he would need to plot a course, navigate shrewdly, and through it all, he would need a hearty mix of knowledge, skill, and down-right luck.

As Nick poured over the map, he saw that it would guide him through the process of gamified learning design. The journey looked like it might be difficult, and he saw that he would encounter hazards along the way. In the background, he could hear the speaker saying, “At each level you will encounter challenges and unknown hardships—but as a reward for your hard fought efforts, you will find plenty of bounty and other treasures, yet unknown. Will luck be for you or against you today? Are you ready to set sail and become the most famous pirate of the sea?”

Nick grabbed the map and his colleagues, and without giving it a second thought, jumped to his feet and shouted, “Pirates Rule the Sea!”

If you'd like to learn more about our certifications for training managers, adult educators, and instructional designers, check out our upcoming events and courses HERE.